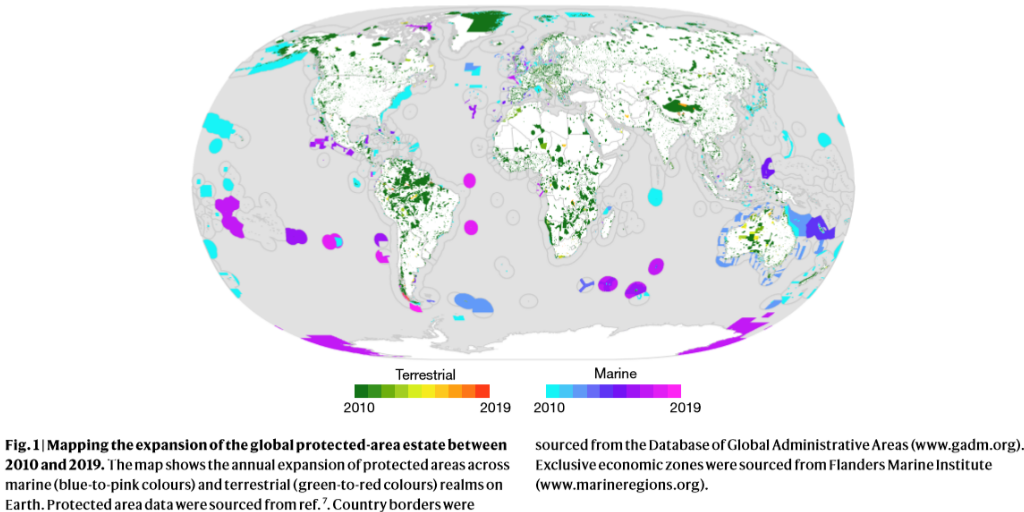 Scientists have conducted a new global review of protected areas, finding that to be more effective, area-based conservation efforts need to be better funded, climate smart, and equitably managed.

The research identifies the actions needed from governments, private entities, and conservation organisations to boost the effectiveness of Protected Areas and other area-based conservation efforts in protecting biodiversity and providing benefits to people.

This comes as national governments across the world made commitments last week to protect nature and biodiversity, including by expanding protected areas.

This research demonstrates the need for greater protection and identifies crucial steps to take to ensure that protected areas are effective. With the right immediate and long-term changes, protected areas could go far further towards achieving their conservation goals and tackling the global nature crisis.

The study revealed some welcome progress – particularly in the marine realm – since 2010. The latest data shows that there are currently over 260,000 designated protected areas worldwide.

However, the research finds that large shortfalls in ecological representation, management effectiveness and measurable biodiversity outcomes diminish the potential role of area-based conservation in stemming biodiversity loss. Almost 80% of known threatened species and more than half of all ecosystems on land and sea remain without adequate protection.

Neville Ash, Director, UN Environment Programme World Conservation Monitoring Centre (UNEP-WCMC) says: “Expanding protected areas over the next decade will be crucial for conservation outcomes and securing benefits from biodiversity. However, protected areas without effective management won’t stop biodiversity loss or provide other benefits. This research sets out clear actions to boost the effectiveness of protected areas. With the necessary leadership and resources, area-based conservation measures will play a crucial role in tackling the global nature crisis, and providing a more secure future for people and nature.”

The authors identify challenges for ensuring that area-based conservation measures are more effective over the next decade.

Area-based conservation measures must be climate smart through restoration and adaptation efforts. Projections made for this paper found that temperatures in the warmest part of the year will increase on average by 2.9°C on protected land by 2050.

Dr Sean Maxwell, lead author of the study, of the University of Queensland, says: “We know that adequately funded and equitably managed protected areas are one of our best tools for reducing threats to biodiversity, yet the current financial shortfall for area-based conservation likely exceeds the multi-billion dollar mark, and as much as 90% have on-site staff capacity that is inadequate or below optimum.”

Dr Naomi Kingston, contributing author and Head of Operations, UNEP-WCMC, says: “Protected areas are key to halting and reversing biodiversity loss. In order to achieve the new round of ambitious global biodiversity targets expected next year, areas designated for nature conservation must be effectively and equitably managed and governed. Governments, the private sector, and conservation organisations all have a role to play.”

The research follows the recent Global Biodiversity Outlook 5 which found that, while the global coverage target agreed in 2010 for the proportions of lands and seas protected (17% and 10% respectively) by the 2020 deadline will be achieved if existing national commitments are met, elements of this target relating to the quality of protected areas have not been met.

The Living Planet Report found that populations of mammals, birds, fish, amphibians and reptiles have seen an average decline of 68% since 1970.

‘Area-based conservation in the 21st century’ is published in Nature. The review was led by the University of Queensland. The World Database on Protected Areas, managed by UNEP-WCMC, underpinned this analysis.

‘Area-based conservation in the 21st century’ is published in Nature

The World Database on Protected Areas